What Determines the Formation of Block Copolymer Nanotubes?

Block copolymer (BCP) nanotubes are of great significance in biomedical materials and nanotechnology. However, it remains challenging to prepare nanotubes by direct self-assembly because of its elusive mechanism and formation conditions. Herein, we report a rational access to BCP nanotubes via polymerization-induced self-assembly (PISA) at 30% w/v solid content by systematically varying the degree of polymerization of the core-forming block in different dispersants and polymerization temperatures. Specifically, dispersion polymerizations of 2,3,4,5,6-pentafluorostyrene (PFS) are conducted at 40–80 °C in either pure ethanol or ethanol with 5–20% cosolvents, for example, DMF, using a poly(N,N-dimethylacrylamide) (PDMA29) as the stabilizer block, leading to the formation of poly(N,N-dimethylacrylamide)-b-poly(2,3,4,5,6-pentafluorostyrene) (PDMA29-b-PPFSx) nanoparticles of various morphologies as revealed by transmission electron microscopy and atomic force microscopy. In pure ethanol and at 70 °C, nanotubes with a rough surface are produced when x is 180–200. Addition of 5% DMF, dioxane, toluene, or THF leads to a drastic change of the morphology (x = 180), and nanotubes with a more smooth surface are only observed at 5% DMF/ethanol. Then, dispersion polymerizations are conducted in 5–20% DMF/ethanol by systematically increasing x and nanotubes are only formed in 5 or 10% DMF/ethanol. Ultrasensitive differential scanning calorimetry is used to measure the solvated glass transition temperature (Tsg), which reveals that as the content of DMF is increased, Tsg of the core-forming PPFS block is gradually lowered in comparison with the dry Tg measured by conventional DSC. It is deduced that nanotubes can be reliably formed when the polymerization temperature (Tp) is lower than or close to Tsg. This hypothesis is confirmed by the results from conducting dispersion polymerization in various dispersants and at different polymerization temperatures. It is concluded that chain mobility, determined by the relative values of Tsg and Tp, plays a critical role in the morphological transition pathway during PISA. When Tp is much higher than Tsg, a typical sphere-worm-vesicle-large compound vesicle morphological transition is observed owing to the highly mobile chains, but one-dimensional fusion of vesicles leading to the formation of nanotubes is favored when Tp is lower than or close to Tsg due to a limited degree of chain mobility. This insight reveals key information that has been missing for reliable preparation of elusive nanotubes and broadens the capability of PISA for the reliable preparation of unusual morphologies. 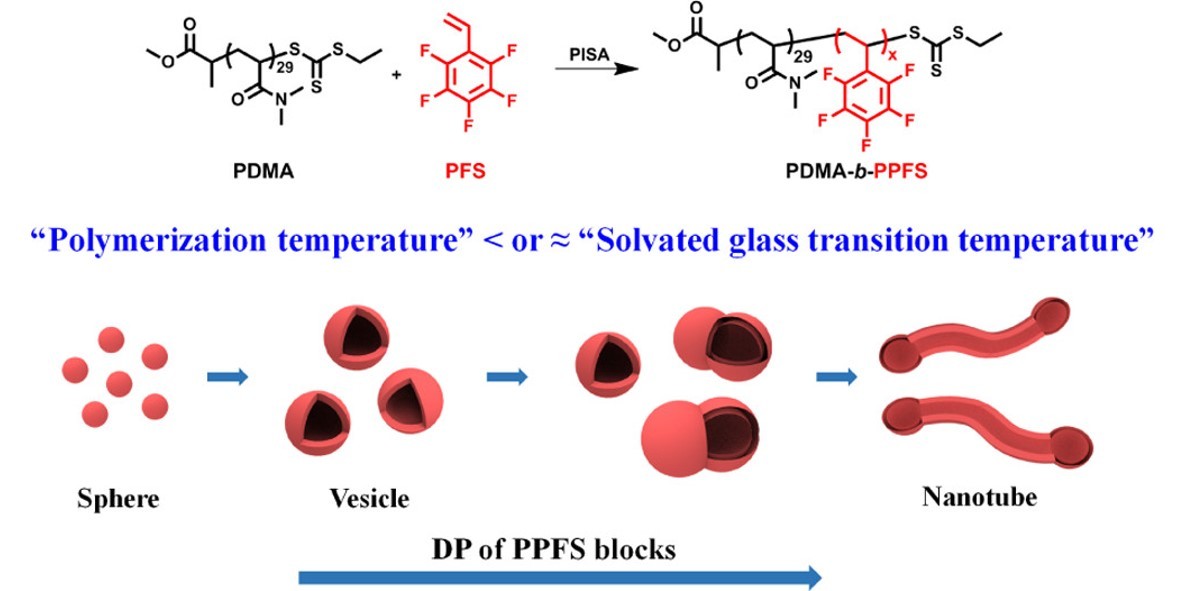