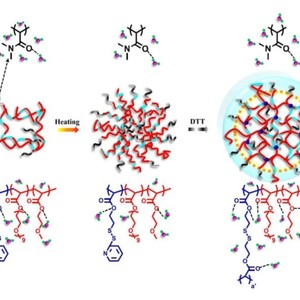 The distinct thermal transition behavior of thermoresponsive block polymers based on poly(ethylene glycol) methyl ether acrylate (PEGA) and their corresponding disulfide-cross-linked nanogels was studied by using FTIR measurements in combination with two-dimensional correlation spectroscopy (2Dcos). Spectral analysis clearly reveals that the sharp thermal transition of the precursor polymer is accompanied by a forced hydration process induced by the hydrogen bond formed between the entrapped water molecules and the C=O groups, while the nanogel with a relatively continuous thermal transition is related to the existence of various dehydrating states of the C=O groups. The C-H groups in the pyridyl disulfide (PDS) units exhibit a distinct change in the thermoresponsive profile of the precursor and the nanogel to show the effect of the polymer architecture on the thermal transition behavior. Additionally, a portion of the poly(N,N-dimethylacrylamide) (PDMA) segments is entrapped in the nanogel core, indicating that the thiol-disulfide exchange reaction occurs rapidly within the nanogels.