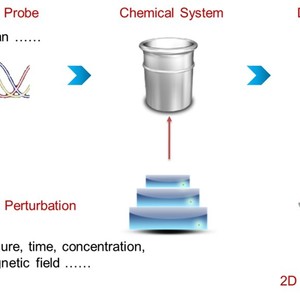 Two-dimensional correlation spectroscopy (2DCOS) is a mathematical method whose basic principles were first proposed by Noda in 1986. Up to the present, 2DCOS has been widely used to study spectral variations of different chemical species under various external perturbations (eg, temperature, pressure, concentration, time, electromagnetic). By spreading peaks along a second dimension, 2DCOS can sort out complex or overlapped spectral features and get an enhanced spectral resolution. Owing to the different response of different species to external variable, additional useful information about molecular motions or conformational changes can be extracted, which cannot be obtained directly from conventional one-dimensional spectra. Perturbation-correlation moving window (PCMW) is a newly developed technique based on 2DCOS. Except for its original ability in determining transition points, PCMW can additionally monitor complicated spectral variations along the perturbation direction. In this critical review, we focus on the application of 2DCOS and PCMW to the characterization of polymers, which are classified in six specific topics: synthetic functional polymers, bio- and natural polymers, glass transition, crystallization and melting of polymers, water diffusion in polymer films, polymer blends and nanocomposites, and polymer-related reactions.