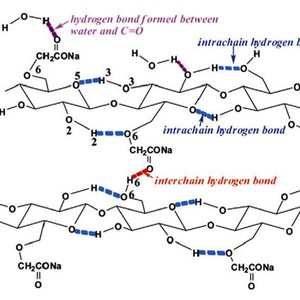 Carboxymethyl cellulose is widely used in many industrial aspects and also in laboratory due to its good biocompatibility. However, special researches on infrared especially aiming at the hydrogen bonds structure of carboxymethyl cellulose were relatively poor. We demonstrate here a full view of infrared spectroscopy in the temperature range of 40–220 °C, mainly aiming at the hydrogen bonds in the NaCMC film. The two important transition points was defined with DSC and together with Infrared analysis, that is, 100 °C corresponding to the complete loss of water molecules and 170 °C to the starting temperature point the O6H6 being oxidized. The series of IR spectra during heating from 40 to 220 °C was analyzed by the two-dimensional correlation method. We found that the water molecules bound with C

O groups and OH groups. With the evaporating of water molecules, the hydrated C