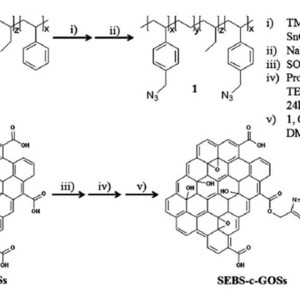 Herein, by taking advantage of click chemistry, we propose a general and effective methodology to covalently functionalize graphene oxide sheets (GOSs) with block copolymers, namely poly(styrene-b-ethylene-co-butylene-b-styrene) (SEBS) triblock copolymers as an example in this study. The covalent attachment of SEBS to GOSs, as well as the individual nature of the hybrids, was confirmed by detailed investigations. For the potential applications of the block copolymer-clicked GOSs, they were incorporated into polystyrene (PS) as reinforcing fillers. The SEBS-clicked GOSs showed excellent compatibility with a PS matrix, and as a consequence, remarkably improved mechanical properties and thermal stability of the resulting composite films were achieved. This protocol is believed to offer possibilities to fully combine the extraordinary performances of GOSs with the multifunctional properties of block copolymers, and thus be useful in a variety of technological fields.