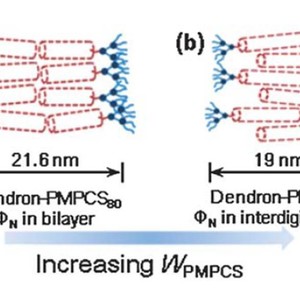 Interplay between the Thermotropic Mesomorphic Behavior and the Microphase Separation in Dendron-Liquid Crystalline...

000). Poly{2,5-bis[(4-methoxyphenyl)oxycarbonyl]styrene} (PMPCS), of which the thermotropic mesomorphic behavior strongly relied on its molecular weight, was utilized as the liquid crystalline polymer block. Thermal property investigation of the copolymers revealed that only the glass transition temperature (111–119 °C) belonging to the PMPCS block was observed, indicating that the dendron molecule and the liquid crystalline polymer block were immiscible and the phase transition of the dendron molecule was restrained. The subtle interplay between the thermotropic mesomorphic behaviors of PMPCS and the microphase structure in these dendron–LCcopolymers was discussed. With increasing molecular weight of the PMPCS block, a morphological evolution from bilayer to interdigitated lamellar structure was proposed based on the small-angle X-ray scattering (SAXS) examination. More importantly, a less-ordered columnar nematic phase instead of a hexatic columnar nematic phase which should be stabilized in the PMPCS block was identified by in situwide-angle X-ray scattering (WAXS) experiments. The degradation of the hierarchical packing of PMPCS chain was attributed to the confinement effect originating from the interdigitated microphase structure.