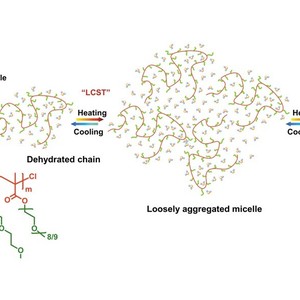 Dynamic thermally reversible hydration behavior of a well-defined thermoresponsive copolymer P(MEO2MA-co-OEGMA475) in D2O synthesized by ATRP random copolymerization of 2-(2-methoxyethoxy)ethyl methacrylate (MEO2MA) and oligo(ethylene glycol) methacrylate (Mn = 475 g/mol) was studied by means of IR spectroscopy in combination with perturbation correlation moving window (PCMW) technique and two-dimensional correlation spectroscopy (2DCOS). Largely different from poly(N-isopropylacrylamide) (PNIPAM), P(MEO2MA-co-OEGMA475) exhibits a sharp change below LCST and a gradual change above LCST due to the absence of strong intermolecular hydrogen bonding interactions between polymer chains, and the apparent phase transition is mainly arising from the multiple chain aggregation without a precontraction process of individual polymer chains. Additionally, the self-aggregation process of P(MEO2MA-co-OEGMA475) is found to be mainly dominated or driven by the conformation changes of oxyethylene side chains, which collapse first to get close to the hydrophobic backbones and then distort to expose hydrophilic ether oxygen groups to the “outer shell” of polymer chains as much as possible. On the other hand, PCMW easily determined the phase transition temperature to be ca. 32.5 °C during heating and ca. 31 °C during cooling as well as the transition temperature range to be 28.5–37 °C. 2DCOS was finally employed to discern the sequence order of all the group motions during heating and cooling. It is concluded that during the phase transition P(MEO2MA-co-OEGMA475) chains successively experience “hydrated chains–dehydrated chains–loosely aggregated micelles–densely aggregated micelles” four consecutive conformation changes. The results were further confirmed by temperature-variable 1H NMR analysis and molecular dynamics simulation.