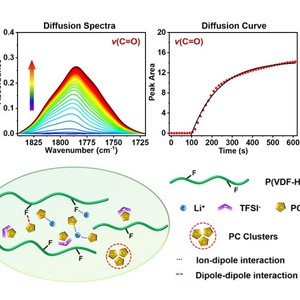 The time-resolved attenuated total reflectance-Fourier transform infrared (ATR-FTIR) spectroscopy is employed to investigated the transport mechanism of gel electrolytes by monitoring the diffusion behavior of propylene carbonate-lithium bis(trifluoromethylsulfonyl)imide (PC-LiTFSI) solution through poly(vinylidene fluoride-co-hexafluoropropylene) (P(VDF-HFP)) films. Fickian behavior has been observed for both TFSI- and PC. Higher temperature leads to faster diffusion of TFSI- and PC, which could be related to the increased free volume in P(VDF-HFP) matrix and rapid molecular movements upon heating. Various molecular interactions among LiTFSI, PC and P(VDF-HFP) have been recognized. During the diffusion process, PC molecules, in the form of small clusters, can firstly diffuse through the P(VDF-HFP) film and interact with P(VDF-HFP) by dipole-dipole interaction, acting as the plasticizer. Then, Li+ diffuses into P(VDF-HFP) with the help of ion-dipole interactions between Li+ and C=O of PC. Meanwhile, TFSI- diffuses through the polymer matrix in solvation states. In addition, slight ion-dipole interactions between Li+ and P(VDF-HFP) have been observed as well. Results in this work contribute to a better understanding of transport process in gel polymer electrolytes for lithium-ion batteries and support the development of improved gel polymer electrolytes by rationally regulating molecular interactions.